Please select your vehicle make and model below.

Ford Ranger Bakkie Insurance you can count on

So you want to break out, escape the confines of your neighbourhood where even the squirrels have nicknames after months of boring lockdown, pack the kids into a 4x4 and drive into the sunset with a roof tent for good measure to accommodate curfew sleepovers. Your partner in crime for this wistful adventure could only be the Big, Bold, and Brutish looking all new Built Ford tough Ford Ranger bakkie. 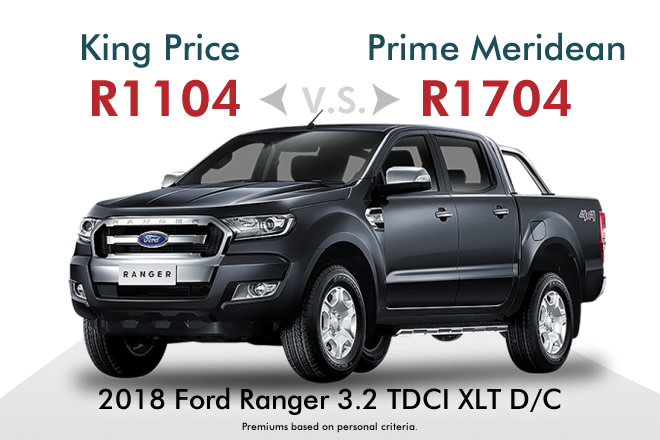 In this insurance price comparrison above we see that King Price insurance is cheaper than Prime Meridian on the 2018 Ford Ranger 3.2 XLT. The current model with its macho looks known as the T6 was designed and engineered in Australia in 2011 and built in Silverton Pretoria where it only takes 6 hours to assemble a Ford Ranger for export to 148 countries .The T6 has reintroduced Ford as the market leader with its Ranger Wildtrack, XLT, XLS and XL model having taken all the best bits of its competitors to produce a bakkie that's both extremely bold in appearance, a workhorse by day and a family wagon by night or weekend and filled to the brim with the latest tech and luxury features such as voice command and touch screen blu tooth infotainment centre. Fords Blue oval might have had a reputation of being a bit more rough than tough, not so with the latest version launched in 2012 in a huge range of specifications and 34 derivatives comprising of three engine options a 2.2 Duratorq TDCi four-cylinder available in a 3.2 Duratorq TDCi and a 2.5 Duratec four-cylinder petrol(discontinued) all with car like road manners, affordable running costs and leisure like SUV interiors while being capable of carrying huge loads.

The 2015 facelifted example we sourced has a 3.2 litre turbo diesel up front with 132kw power on tap with an indicated fuel consumption of 9 litres per 100km and is immediately identifiable by elements of Fords Kinetic Design such as projector style headlights ,new bonnet, and huge trapezoidal grill. The Casio G-shock watch and iconic power tool brands such as Bosch and DeWalt provided inspiration for the interior design where the airy commanding cab offers great all round visibility and instrument cluster with its central LED display is framed by a heavy, bold durable rubber protective frame. Its clever interior packaging is further enhanced by 20 plus storage areas including a cubby hole big enough for a laptop computer and its safe too with no fewer than 6 airbags, which should delight your car insurance. It's not impossible to get three adults seated in the back with 2 six foot beer and boere-wors loving men sitting behind each other with ease. With its robust lifted "beltline" Ford has without a doubt the most modern proportions, standing nearly 2 meters (1815mm) tall 5.4 meters long the Ford Ranger has 230mm ground clearance, 800mm water-wading depth, 28-degree approach and 25-degree departure angles making it a very decent off roader to tackle those long and bumpy Karoo backroads. In addition to its towing capacity of 3500kg should allow for hauling the heaviest of 4x4 camp trailers all the way to Hotazel.

All Ford Bakkies are sold with a 4-year 120 000 km comprehensive warranty, 6-year or 90000km service plan and a 5-year unlimited km corrosion warranty to add to your peace of mind. Service intervals of 20000km for both petrol and diesel derivatives will add some relief to your pocket once the vehicle is out of its service plan.

With it's masculine stance and it's on-point styling, the Ford Ranger bakkie looks to be not only a capable worker, but also a comfortable daily driver.

Get an insurance quote for your Ford Ranger bakkie today.

The New #FordRanger is our toughest, smartest and most capable Ranger ever. Whatever the challenge, #BringIt!