Intel wants to prove self-driving cars will be safe

The past year has seen a major interest in self-driving cars. News websites are littered with articles on all things autonomous and it’s becoming increasingly evident that self-driving cars are going to be a reality within the next 15-30 years. One of the few things holding it back, and a very important one at that, is safety.

Car insurance is calculated on risk and if autonomous cars provide a substantial increase to safety, you can be sure you’ll get cheaper premiums.

Big players in the autonomous landscape, such as Alphabet (Google’s parent company) and Tesla, have been hard at work trying to solve this problem. Now Intel is getting involved in the industry with its recent acquisition of Mobileye, a company whose sole focus is around autonomous vehicles. Intel CEO Brian Krzanich had the following to say about their acquisition of Mobileye:

“With Mobileye, Intel emerges as a leader in creating the technology foundation that the automotive industry needs for an autonomous future. It’s an exciting engineering challenge and a huge growth opportunity for Intel. Even more exciting is the potential for autonomous cars to transform industries, improve society and save millions of lives.“

The self-driving industry is still in the early stages of it’s development and a set of standards hasn’t been established. However, CEO of Mobileye, Amnon Shashua has proposed a software model he calls Responsibility Sensitive Safety (RSS) in an attempt to prove self-driving cars can be safe. This model provides specific and measurable parameters for the human concept of responsibility and caution.

The RSS model creates a “Safe State” that prevents an autonomous vehicle from being the cause of an accident, regardless of what action is taken by other vehicles. The image below shows one aspect of the proposed model. 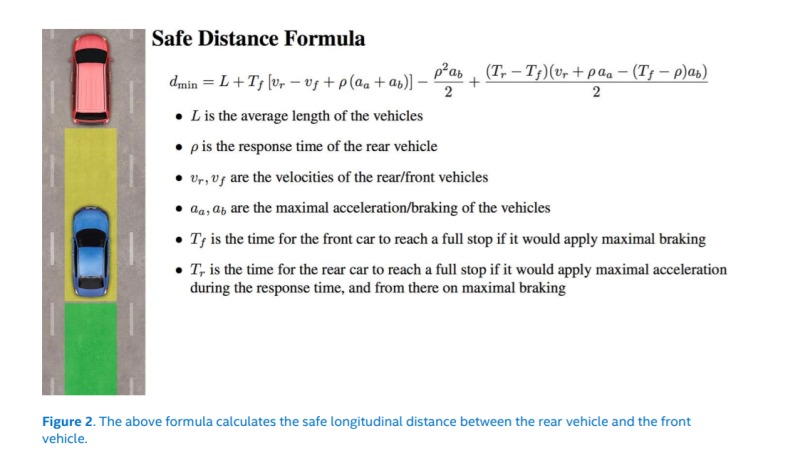 This is a big step in the right direction for autonomous vehicles. Policy makers are reaching a point where they need to create and refine laws to account for numerous situations, one of them being accidents and who to blame should one occur involving an autonomous car. The RSS model provides a starting point for policy makers, regulators and automakers to evaluate this. For consumers like us, we can rest assured that someone’s looking to make our roads safer in the future.

Insurers generally over-inflate your yearly increase in order to make more money. If you feel like you're being overcharged, fill out your details here.